Here's a totally awesome cheesy white pasta sauce. It's not creamy, so it's not heavy. Best served with veal tortellini.

Ingredients are guessed after the fact, and are approximate.

Internode have recently launched their "Naked" ADSL2+ plans, and I have to say, I'm unimpressed. They're pitching it saying that you don't have to deal with Telstra anymore, and that it's cheaper. So, let's look at the numbers.

But what compromises do you make? 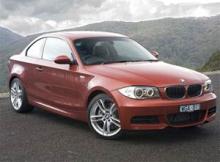 The whole point of a luxury car is that every schmuck doesn't have one. You're not paying for the car so much as you're paying for the badge on the bonnet.

A 1-series hatchback, fair enough. It's a market BMW had never explored, previously dominated by the likes of the VW Golf. That said, the 1-series hatchback was a bit of a flop. You'd be ashamed to say "I have a BMW 1-series" at a dinner party. I can't think of a valid reason to buy one. For the same money you'd just go and buy a Golf R32; which looks a hell of a lot better, and is a whole lot more fun to drive. 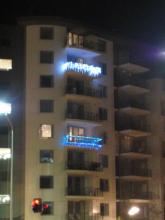 Shock and/or horror. Greens and the media alike are overstating the effectiveness of Earth Hour. It's fashionable in the media nowadays to be "green". Every other day there's "news" about climate change, whether it be the ice caps melting, or some species allegedly dying as a result of it.

According to new Mortgage research, first home buyers are spending their hard-earned deposits on gadgets and "fashion items". A lot of what you hear in the media about first-home buyers is about how much of a struggle it is.

The Australian Conservation Foundation has released a report investigating how Governments' funds managers (most notably; super funds) are investing their money. (Interestingly, they haven't posted the report on their website)

What's with the new trend towards an "open hamburger"? You'll see it particularly at upmarket places, like Milk and Honey. The whole point of a hamburger is that its contents are surrounded by bun, you can pick it up and eat it without diving for a knife and fork.

According to Miriam-Webster, a hamburger is:

Taken a look at the cover of this month's PC Authority? Splashed right across the front:

The great thing about the ever-increasing pervasiveness of the Internet is the availability of information about practically anything. As organisations and other groups see that there's more and more people online, they're more inclined to look to the Internet as a way to disseminate their message.

For some reason, a lot of restaurants frown upon large group bookings. When in a group of 20 at a restaurant, you'll typically get poor service. Kingsleys Steak and Crabhouse is no different.

Don't get me wrong -- I understand that trying to get 20 dishes out to a table is a logistical nightmare. But that's no excuse for bad service, cold food and no drinks. Apart from curly fries, serving large groups really is something Hog's Breath has down-pat.